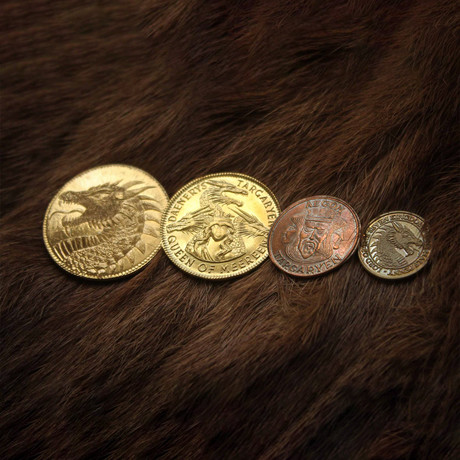 This set of four coins features the Targaryen kings of old and the Mother of Dragons, Daenerys Targaryen.

The Daenerys Targaryen Mark of Meereen shows the Queen of Meereen surrounded by her three dragons: Drogon, Rhaegal, and Viserion. On the reverse is a Meereenese pyramid and broken manacles, symbolizing her freeing of the slaves. She had this coin minted to replace the concept of slaves as currency on the city. The golden Mark is worth about half as much as a Westerosi Dragon, or the equivalent of 105 silver Stags.

Aegon I Targaryen, The Conqueror, was the first king on The Iron Throne. With the help of his dragons and his sister-wives, he united the Seven Kingdoms under one ruler. This Aegon I Targaryen Penny features Aegon and his wives Visenya and Rhaenys with a dragon sigil on the reverse.

The Aegon V Targaryen Half-Penny features Aegon V "Egg" Targaryen with a dragon on the reverse. Aegon was the brother of Maester Aemon and grandfather of Aerys II Targaryen, The Mad King.

— NOTE: Each coin is treated to look as if it has been handled and circulated. Coloring and patinas will vary, so no two coins look exactly the same.